Generally speaking, flash duration is that (very short) period of time during which the light emitted by a flash unit can be seen, or regarding to photography, during which the flash light causes luminous exposure on a photographic sensor or film.

With classic flash units and their (mostly) xenon-filled flash tubes, the typical brightness curve starts with a rapid ascent to its maximum value, from where it then exponentially declines. Since, on its decline, brightness remains a certain time at levels that in practice do not have much further influence on the overall luminous exposure, why in most cases it makes sense to only consider those periods of time during which brightness is above a reasonable minimum level. 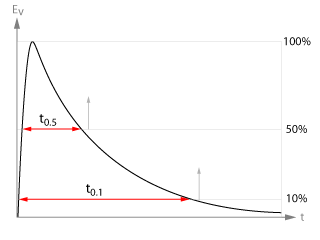 Here, as mentioned above, flash duration directly depends on the maximum brightness of the measured flash and considers only those periods when the brightness curve was above certain levels, traditionally defined as follows. 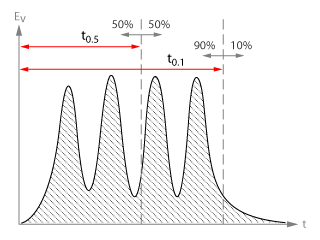 The brightness curves of modern flash units, however, often fundamentally differ from the one referred to above. Especially when equipped with high-speed-sync (HSS) technology, it may contain some heavily alternating parts. For those cases, as an additional means there is an alternative measurement approach: Instead of referring to maximum brightness, measurement results refer to the overall luminous exposure caused by the measured flash.

In view of the above, the traditional characteristic values need to be re-interpreted as follows:

What is all this for ?

Flash duration is an important parameter for photographers who intend to freeze motion (e.g. when working with high speed photography or the like). The faster the motion, the shorter requires to be the burning time provided by utilized flash units. This is the moment when a flash duration meter comes into play. It bluntly reveals if provided information are just used by manufacturers to promote their equipment. In some cases, for example, t0.5 is being provided instead of t0.1 as it of course appears much more favorable.

In other cases, even though t0.1 seems to be sufficiently short, images still show noticeable motion blur. Here, a flash duration meter capable of measuring the full burning time may reveal that the flash unit keeps emitting (faint but clearly measurable) light even after t0.1 has long passed.

By continuing to browse this website you are agreeing to the use of cookies.
Please enable JavaScript in your browser.